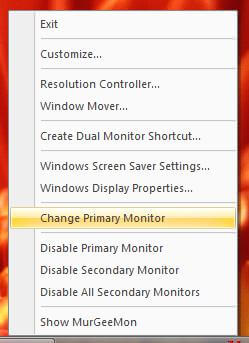 How to set second monitor as primary monitor

Let’s say now you set second monitor as primary, so your start menu and desktop icons will move to the right hand side monitor which was originally the second monitor and the windows or programs which were originally on your secondary monitor would be visible on the monitor which is in front of you as per the above assumption. An important thing to note here is that although the primary monitor has been changed, but still you will have to move mouse cursor in the same old direction. In case you want to change the monitors again, just initiate the change again and start menu and desktop icons will come back to the monitor on your front.

Windows Control panel does provides a check box which says something like This is my Main Monitor in Windows Vista. In other Windows Operating system such as Windows 7 or Windows XP, etc, you will find a check box saying the same thing but might be in different words. All you would need to do is open display settings, verify that you can see two black colored boxes depicting each of your dual monitors, one black box would be already selected, click the other one, check the check box saying This is my Main Monitor and click on OK to close the display settings.

There is an easy way as well as depicted in the figure here in this post to set the second monitor as primary anytime with only two mouse clicks. Click on the image and download the software and toggle start menu and desktop icons to any of the desired monitor with only 2 easy mouse clicks. 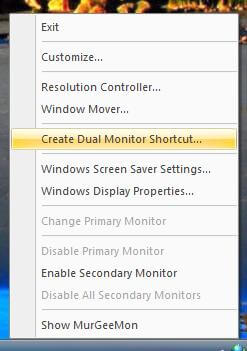